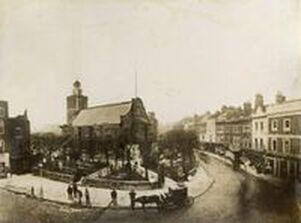 The present church of St Mary Abbots will be 150 years old this year and there has been a community of worship here for some 1000 years, making it the site of one of the Earliest churches in Kensington.

Until the 19th century St Mary Abbots was the only church in Kensington, but as the population grew so did the number of churches in the surrounding area.    By the 1860’s the church was again considered too small; it was also in a serious state of disrepair.   In 1868, the Vicar of Kensington, Archdeacon Sinclair, commissioned Sir George Gilbert Scott to produce a sketch design of the new parish church of Kensington.  Scott was probably the most famous and most sought after architect of his day, confident and eclectic in his range of buildings and styles which included cottages and stately homes, gaols and workhouses, town halls and government offices.    Our present church is his last but one major church and represents his work at its best.

The main building of the church was finished in early 1872 and consecrated on 14th May of that year.  The spire and tower were not completed until 7 ½ years later, a year after Scott’s death. The spire is one of the tallest in London, and Gilbert Scott provided an exceptionally spacious stone‐built tower which holds a fine, heavy Victorian ring of ten bells (and the clock mechanism) without any apparent strain.   Much of the internal finishing and the addition of the cloister was carried out by his second son, John Oldrid Scott.

​In March 1944 St Mary Abbots suffered war damage in the Blitz.  Although the nave and chancel roofs were destroyed and damage done to stained glass and the organ, the main structure was not seriously harmed.    The Church was temporarily repaired to allow services to continut.  In February 1956 a service of thanksgiving was held in the restored Church in its Cathedral like Interior.

Currently St Mary Abbots is in need of updating, and our first project and fundraising effort will go towards installing better disabled access and loo facilities.  This will be of benefit to our congregation, visitors and for those hiring the church for events, who currently rely on a temporary ramp and one Victorian loo in the vestry, and (for events) portaloos.

If you would like to donate money to our church to enable this work, and towards the maintenance of this beautiful building please look at our ' support us' page HERE.