The St Mary Abbots Guild of Bellringers
The St Mary Abbots Guild was founded in 1896, and the Guild has records of ringing going back for more than a century.
In common with many other Towers, the enforced silence for church bells during the Second World War caused a hiatus in ringing by the Guild, but since something of a revival in the 1970s, the Guild has again been very active.

We ring regularly for Sunday morning and evening services, not just at St Mary Abbots, but at a number of other London churches as well. We also ring for special royal and other national occasions, Church festivals and weddings. More details can be found below. 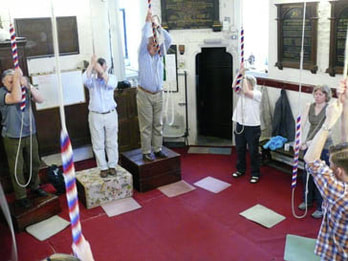 Practices are held on Thursday Evenings
The St Mary Abbots Guild holds regular practices at St Mary Abbots every Thursday evening from 7.30 to 9.15 p.m. There is a variety of ringing on ten bells, from call changes to spliced Surprise Royal, and we are often working on a non-standard method.
​
Visitors are very welcome to attend and join us in ringing but should be aware that the main aim of the practice is to help the regular Sunday Service ringers maintain as high a standard as possible for Sunday Service ringing.
​
The entrance to the tower is in an alley immediately to the north of the church, off Kensington Church Street. Go through the metal gate at the east end of the building, past the vestry door, and the tower stairs are through a small door on the left at the base of a buttress.  Alternatively, please contact one of the Officers for information.

You can hear the bells being rung by clicking HERE.

Cancelled Practices
Practices are very occasionally cancelled or curtailed because of other ringing or events in the Church. Please contact us in advance to avoid disappointment. ​
Training bells
In 2016, the bellringers raised the money to install a complete set of six “training bells” in the tower. These are not actual bells but are weighted metal blocks attached to wheels which can be rung with ropes in the same way as the real bells, but without making any natural sound. They can however be linked to computer terminals that produce artificial bell sounds in the ringing chamber. They are ideal for teaching, with the additional benefit that they do not make a noise outside the tower and can thus be used at any time of day without disturbing our neighbours.
​Learning to Ring / joining our guild
As with many other London churches, the band relies heavily on ringers from all over the London area, and indeed in some cases from outside London. We would very much welcome both parishioners interested in learning to ring, and ringers with experience on six and eight bells who would like to progress to ten bell ringing. Visitors are always welcome, whether ringers, those interested in learning to ring, or people who would just like to see the bells being rung.
​Please contact one of the Officers for details. 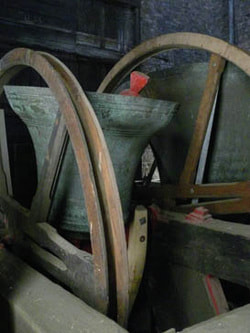 The Bells
​Under the tallest spire in London, Gilbert Scott provided an exceptionally spacious stone‐built tower which holds a fine, heavy Victorian ring of ten bells without any apparent strain. Towers with rings of ten bells are still relatively rare: of the 6000 or so towers worldwide with four or more bells, only around 280 have ten.

The current ring of bells was hung when the present Church was built in 1879, but in fact some of the individual bells pre‐date this building by many years.  There have been bells at St Mary Abbots since at least the beginning of the 18th century. Although the records are not entirely clear, it seems the church had a ring of six heavy bells at this time. In 1772, the tower of the old church was rebuilt, and the bells were recast by Janaway of Chelsea and augmented to eight. There are peal boards in the tower which record some of the major ringing achievements on these bells.

When the Church was rebuilt in 1879, five of these eight bells were re‐hung in the new tower. The remaining three bells were recast by John Warner and Sons, and two new bells were added to make the current ring of ten bells. One peal board commemorates the first and last peals rung on the old eight, and the first peal of bells rung on the new ten. 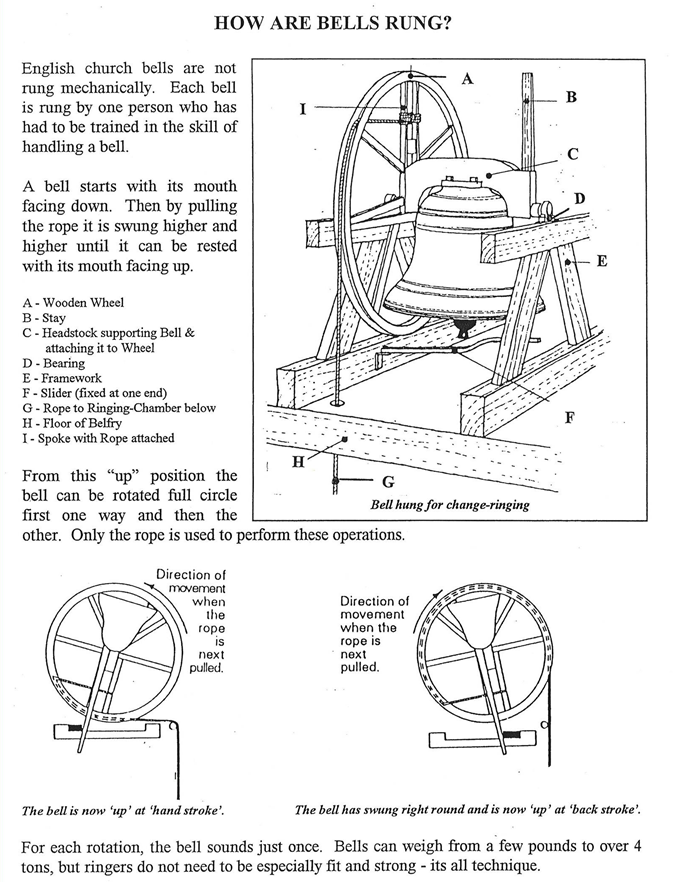 New Chiming Bell
In addition to these bells a small bell was acquired in 2007 and installed in the tower to be chimed by the Virger prior to services when the other bells are not rung.  The chiming bell was cast by the Whitechapel Foundry in 1853, is 34 inches in diameter and weighs approx 7cwt.
St Mary Abbots Bells - Regular Ringing
Ringing on Sunday mornings consists of short pieces of continuous ringing known as "touches". These can go on for as little as three or four minutes, or as long as 20 minutes. Ringing for Church services is the most important part of our mission, and we try to make it as smooth and musical as possible. The brief halts between touches allow the ringers to change places with each other, so that different people can ring in each touch.

Practice nights also consist of short touches. They are an opportunity for the ringers to try new things as well as perfecting their skills. As a result, the ringing is sometimes a little bumpy. Nevertheless, we still try to maintain a reasonable standard, and to stop the ringing promptly if it is not going well.

Quarter Peals consist of around fifty‐five minutes to an hour of continuous ringing. You may hear the band ring "rounds" (when you hear the bells sound in a descending scales) for a few minutes beforehand, followed by a pause before the quarter peal starts. This pause is to enable the band to adjust the length of the bell ropes before ringing for a longish period without stopping. If we are ringing for a service, then we may ring a short touch immediately before the service starts, if the quarter peal has finished a few minutes early.

The Band has a programme of quarter peals at the three churches we serve. As a general rule, the Band attempts the following quarters on a regular basis:
​
​Peals at St Mary Abbots
Peals at St Mary Abbots consist of around three and half hours of continuous ringing (the time is generally shorter at other towers with a smaller ring of lighter bells). A peal is not considered to be "true" unless the ringers have rung more than 5000 unique changes correctly, and without breaks or outside assistance. Again, you may hear some rounds beforehand, as the ringers try out the length of the bell ropes and decide whether adjustments are necessary.

While some churches may allow peals to be rung on a monthly or even weekly basis, at St Mary Abbots we usually have only six attempt each year, all to celebrate important church or national occasions. These are:
​
Additional peals may occasionally be rung for special occasions, such as important national or royal events.
The number of peals is limited out of consideration for neighbouring homes and businesses. We like to allocate one of these attempts to ringers from outside the local band. If you would like to apply to arrange a visitors' peal, please contact the Tower Secretary (see above).

Peals at our other towers
Peals at St Luke’s Chelsea are currently very limited, owing to both the condition of the bells and the proximity of a major hospital. It is therefore not possible to allow visitors’ peals here, but if you would like to take part in one of the occasional peals attempted by the local band, please contact the Tower Secretary (see above).
​
Having for several years been in poor condition and difficult to ring, in 2016 the bells at St Stephen’s Rochester Row were rehung in a new frame and new sound control installed. They are now available for visiting peal attempts. Please contact the Tower Secretary if you would like to schedule an attempt.
St Mary Abbots Bells - Information for non‐ringing Visitors
You do not have to be a ringer to visit the St Mary Abbots tower and see the bells being rung. Visitors are welcome to join us on Sunday mornings when we ring from 8.45 to 9.30 and on Thursday evenings when we practice from 7.30 to 9.15. The tower is on the North side of the Church.

When you visit, please be aware that ringing is more difficult than experienced ringers make it look. It requires concentration to ring well, and indeed distracting someone who is ringing can be positively dangerous, since there is a very heavy bell on the other end of that flying rope. We therefore observe some simple rules in the bell tower, to ensure both safety and good ringing:

•    Never go further up the tower than the ringing room (where the ringers stand) without one of the ringers to guide you.
•    Stand well back from anyone who is ringing to avoid becoming entangled in the ropes.
•    Whilst ringing is going on, avoid talking, moving around, or making a lot of noise.
•    Do not take photographs using a flash, as this can be distracting.

If ringing is going on when you arrive, do feel free to slip into the ringing room and sit down on a nearby bench to watch. We will say hello properly when we've finished ringing!
​
Perhaps you've wondered about learning to ring yourself. If so, please get in touch. We'd love to recruit some new ringers.
The PCC of St Mary Abbots with Christ Church and St Philip is a Registered Charity : Number 1132235