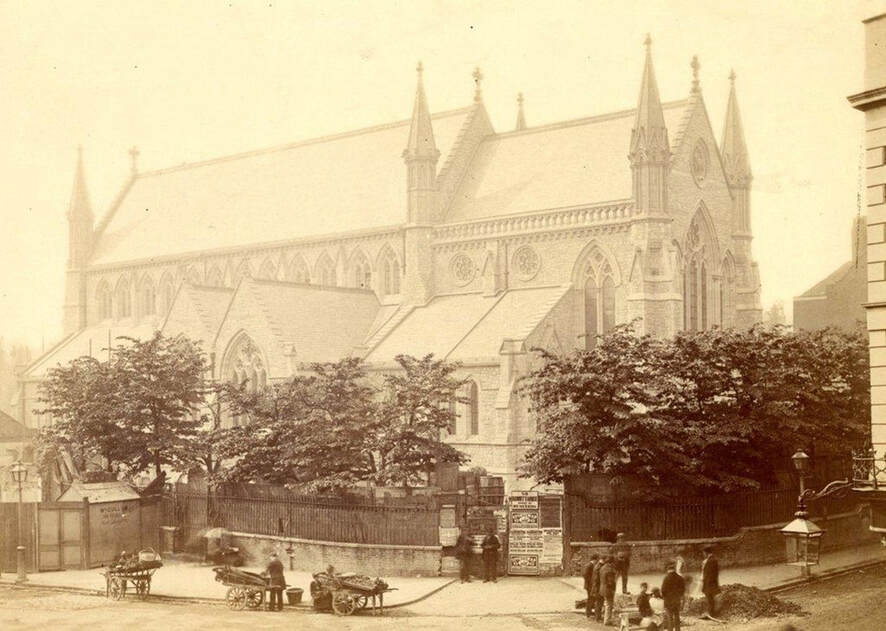 The new church without the spire, 1872.
workmen, ascended the scaffolding by a series of canvas-cased ladders and held a short service of dedication - some 264 feet above the congregation assembled for a similar service in the nave of the church".  An extract from Miss Judith Gillum Scott's book 'The story of St Mary Abbots Kensington". 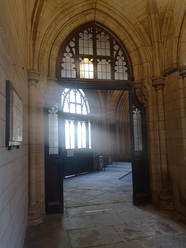 ​​Much of the internal finishing and the addition of the cloister was carried out by his second son, John Oldrid Scott and grandson.

Dave walker writes for the Library Time Machine "This is the ‘winding and rising vaulted cloistral approach’ to the south door of St Mary Abbots added by John Oldrid Scott in 1889-93. The arched entrance almost looks forbidding – something about gothic tales and fanciful whims to fuel the overactive imagination – but as soon as you walk through, those feelings vanish. The sense of another era and the peace and quiet away from the traffic soon becomes a welcome respite." 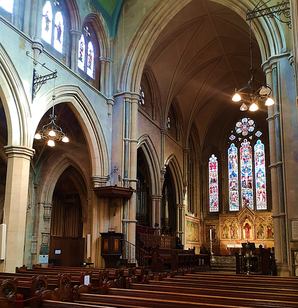 ​Sir George Gilbert Scott was the archetypal Victorian architect, confident and eclectic in his range of buildings and styles.  His designs included cottages and stately homes, gaols and workhouses, town halls and government offices.  His most famous secular buildings are probably the Foreign Office, Glasgow University, the Midland Grand Hotel at St Pancras railway station and the recently restored Albert Memorial in Kensington Gardens.  He encompassed all the architectural styles of the day within his gamut.

​Above all though, to both his contemporaries and to subsequent generations, he was a church architect who worked in a neo-Gothic style.  He and his office built or restored many hundreds of churches.  Many of Britain’s mediaeval cathedrals such as Lichfield, Chester, Chichester and St David’s, to name but a few, owe much of their modern appearance to Scott’s restoration. 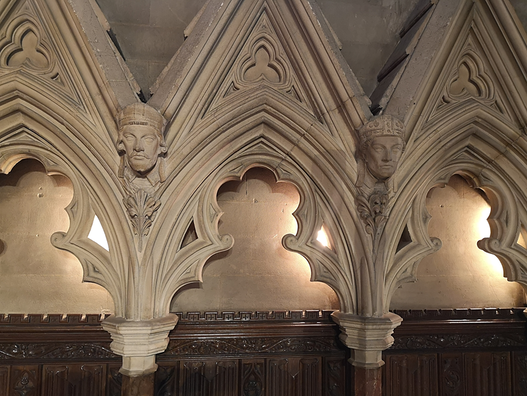 ​St Mary Abbots, his last but one major church, represents Scott’s work at its best.  Broadly based on early Decorated style, sometimes known as Geometric, it is characterised by a relatively plain interior in the main body of the church which serves to focus attention on the more elaborate chancel, altar and reredos.  The exterior elements are excellently grouped and balanced, one of Scott’s great architectural skills.  With the exception of the spire, exterior elaboration is eschewed.  Instead, there is an effect of great strength and confidence, speaking silent volumes about Victorian society and its religion. 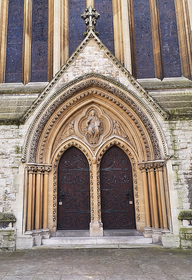 ​ Given his constant involvement with church and cathedral restoration, it is inevitable that there are echoes of other older buildings, demonstrated by the two most dramatic exterior features.

​The West front, with its tall window and excellent carved tympanum, is loosely based on Dunblane Cathedral, whilst the 278 ft high spire is clearly influenced by that of St Mary Redcliffe, Bristol.  Of Scott’s other original churches, All Souls’, Haley Hill, Halifax (1855-59) and his final building, St Mary’s Cathedral, Edinburgh (1874-79) are most similar to St Mary Abbots.
The PCC of St Mary Abbots with Christ Church and St Philip is a Registered Charity : Number 1132235