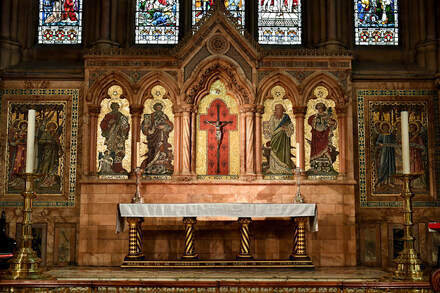 The high altar below the great east window is of marble on a wooden frame. The reredos (behind the alter) is of alabaster and marble with Italian pictorial mosaic panels showing the four Evangelists. The altar and reredos formed part of Sir George Gilbert Scott's original design, and were completed by his grandson Giles.
​
The Florentine crucifix was added later. The two mosaics to either side of the reredos are dated 1882 by Salviati from Venice.

​The lectern was given to the church in memory of Mrs Elizabeth France who founded the Chapel of St Elizabeth of Hungary in the Kensington workhouse (later to become St Mary Abbots Hospital). Mrs France was the wife of one of the workhouse guardians.

​The brass eagle follows the design of an earlier example in the Chapel of University College, Oxford, the pedestal following a similar example in Eton College, Chapel.

This is a church of England Church.  All are welcome
The PCC of St Mary Abbots with Christ Church and St Philip is a Registered Charity : Number 1132235